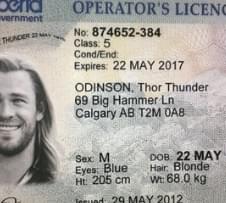 You can’t make this up! Someone thought it would be a great idea to try and buy marijuana over the Internet from Canada. So instead of trying to purchase it themselves, they thought using a fake ID would be the way to go since you have to be at least 18 years of age to purchase it. Keep in mind that buying weed in Canada is not illegal but using a fake ID is. When the pot dispensary saw the ID, they knew something wasn’t right. The biggest issue was that the picture on the fake Alberta driver’s license looked a lot like Chris Hemsworth, the actor who stars in the “Thor” movies. The other big issue was that the license contained some Thor-ish information. For example, the name listed was “Thor Thunder Odinson” and the address was listed as “69 Big Hammer Ln.” And finally, the biggest issue with the fake ID was that it showed an expiration date of May 22, 2017.