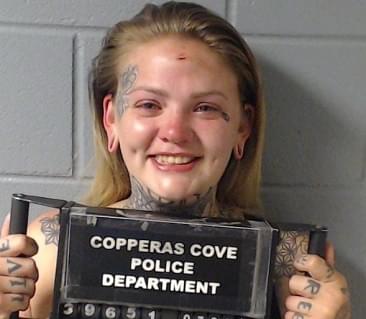 UGH…A Texas mom finds her self in hot water after allegedly leaving her infant in a running car while she headed into a club to take a few shots at the bar. Officers found her baby around 2 am in the back of a Buick that was parked right outside the club. The baby, Riley, was simply sleeping with the car unlocked and the engine running. When officers confronted Samantha Grace Vaughan, she shouted racist slurs at the officers. She went on to tell them that she only went into the club to use the restroom. She said that why she was in there she figured she would grab a quick shot and that she only drank two of them. A breathalyzer test later that night determined her blood alcohol level was 0.148. She then allegedly continued to hurl racial slurs. Police put her in handcuffs as she continued to curse and Vaughan also told the officers she came to the club to pick up her husband, whom she sat with while drinking shots. She did manage after all this to smile for her mug shot.