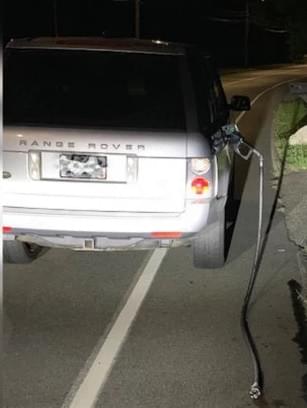 Pretty obvious SOMETHING was off!!! It’s very hard to talk your way out of a drunk driving charge when the reason you were pulled over was that you forgot to take the gas hose out of your tank when filling it up earlier in the night. A woman was busted in Massachusetts for drunk driving after cops found her driving with a gas pump nozzle attached to her Range Rover. Authorities in Middlesex County identified the woman as Alicia Esquilin of Hudson, New Hampshire. Good news is that police say the gas nozzle was later returned to its “rightful owner,” which was about six miles away from where she was pulled over. She was arraigned on charges of operating under the influence of liquor, negligent operations of a motor vehicle and an open container violation.