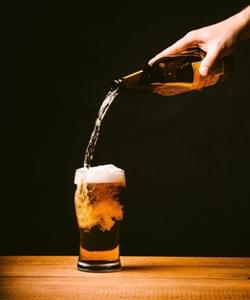 In 1956, the U.S. exploded atomic bombs near a few beers to see if they are safe to drink. They are indeed. Add beer to the list of things to survive nuclear war. Cockroaches, Keith Richards and beer. 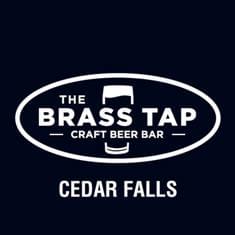 Spent some more time at my home away from home this week; The Brass Tap in Cedar Falls. Before I talk about a beer, I want to mention some of the food. Wow! Not traditional bar food, at all. Upscale pub grub is what I would call it. On Tuesday (my usual night to go there), I asked bar-maiden Carly, what food item she would suggest to someone who needed something filling and tasty. She suggested some appetizers and sides but I meant meal. She said, “Well then, it has to be the Pub Burger! I’ll recommend that all day!” I took her advice and I can tell you, she is a genius! The Brass Tap Signature (TBTS) burger is a gourmet blend of chuck, brisket and short rib meat. That alone says a lot! Juicy and flavorful. However, they send it over the top Applewood bacon, smoked Gouda and the piece de resistance, Jalapeño cream cheese, topped with fresh leaf lettuce and tomato. You can add purple onion and pickles if you wish, as they put them on the side for you. Served with amazing, crispy fries, this burger is THE burger to beat. I love hamburgers and have had some great ones, but this is tops for me. They even suggest a couple beers to pair it with on the menu. 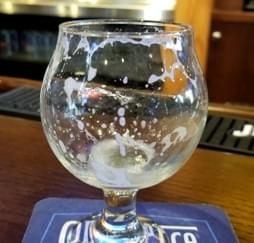 Now, on to beer! Pivo Brewery out of Calmar was the Brewery of the Month for May and I have tried and blogged about a couple of their beers already, but this is a new one and I love it! Pivo Conover Cucumber is a Pale Ale at 6.1% ABV. It pours a pale gold color and a very light hop on the nose. However, there’s definitely cucumber there as well, like you smell with cucumber water. It’s wheaty with very little hop bitter. The cucumber is an extremely refreshing addition to the palate. This is not sweet by any means. Crisp and clean finish with the essence of cucumber rind which I believe gives the beer the flavor. Another great hot summer day refresher!

Here's What I Did Last Friday!

Last Friday, I took the grand prize winner of the Millstream Brewery giveaway to Amana, to be a “Brewer-for-a-day”! Chris Sweeny of Waterloo was my guest and was extremely excited that he’d won the chance to brew in the oldest brewery in Iowa. I found that Chris is a bit of a home brewer, himself, and was looking forward to learning some new things from Millstream. Brewmaster, Chris Priebe, is a great guy to be around. He is VERY knowledgeable about his craft and loves what he does for a living. He’s part-owner of Millstream Brewery and takes pride in the product they put out. He’s also very funny and made the day fun as well as informative. We brewed Millstream’s Schild Brau which is a amber colored lager. We grinded the grains and malt, boiled the mash, added a couple different hops and watched the whole process as we went along. Priebe was also telling Sweeny about the difference in amounts of what we were doing compared to home brewing. We also met Dan, who brews the sodas at Millstream. He was making a root beer and a sarsaparilla. You have NO idea how much sugar goies into making large batches of these! No wonder they are so good! We then had an amazing lunch at the new Brau Haus. It features authentic German-styles foods like schnitzel, bratwurst, pretzels and more! Tasted a few brews throughout the day as we were brewing, as it was a hot day in a hot brew house. I was amazed at the IPAs they offer! Hoppy Hour White IPA and Hop2 Double IPA. Both were milder than other IPA’s I’ve had. I surprisingly loved the Hop2 Double!!

The leftover mash after the brew was transferred, filtered and in another tank where the hops were added.

All in all, it was a fun and interesting day, revolving around beer. I highly suggest making every Friday like this!