Frank Stallone – Far From Over 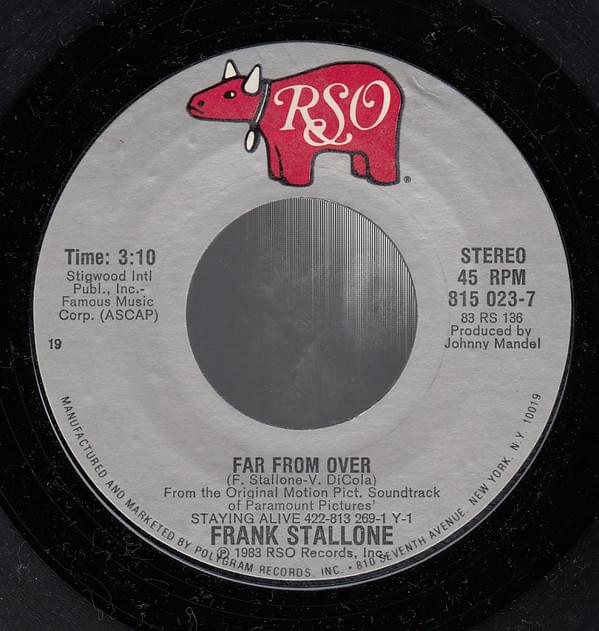 Sylvester Stallone’s more famous brother, Frank, was a musician and with out his brother’s help, we may never had heard of him. This could have been a travesty and might have changed the music landscape forever.

Just kidding. Frank should kiss Sly’s feet everyday of his life, because we know he even had a brother. Similar in looks, not so much in talent, Frank did shine a few times on his own. One of my favorite movie duds, HUDSON HAWK with Bruce Willis and Danny Aiello, has Frank playing a gangster type, forcing the newly released from prison, Hawk (Bruce), into stealing some DaVinci art.

He is also featured as a commentator on the private video series WORLD’S DUMBEST…. A show listed on IMDb as “A bunch of nobodies make jokes about funny videos.” Says it all. If you’ve seen any of the episodes, you know Rambo’s RamBRO doesn’t like Russians. That might have something to do with Rocky IV.

Frank was nominated for a Golden Globe and won a Grammy for today;s forgotten song, “Far From Over”, written for the John Travolta beefcake film, ‘Stayin’ Alive” – a sequel (somewhat) to ‘Saturday Night Fever’. While nearly every Travolta flick has him dancing at some point, this one actually shows how much of a dancer he really is. The choreography for the stage show in the story is pretty intense! I’ll admit, the movie is a guilty pleasure of mine for a couple reasons:

I’m only a little ashamed of what I’ve just made public.

Good news? THE VIDEO IS BELOW! ENJOY!!!