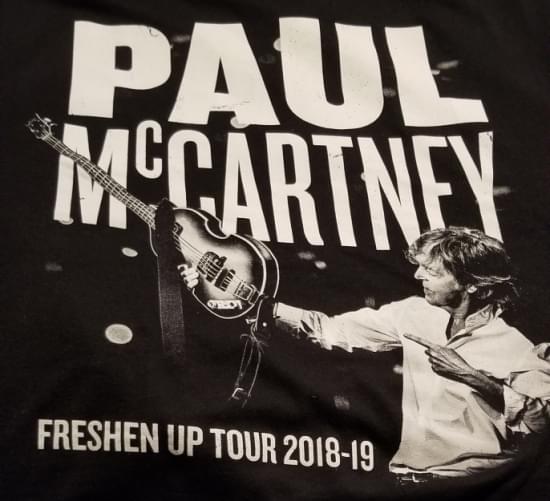 When Craig and Connor (Promotions Director) entered my studio right after I started my show the week before last, I was worried something was coming…. Well, there definitely was! I was to give away tickets to see Paul McCartney to one of our qualifiers at the Isle Casino Waterloo that evening, so when Connor said, on air, that there was another pair of tickets, of course I assumed I was now giving away 2 pair! That would have been pretty cool to see someone else also get tickets to see Sir Paul!

But when Connor and Craig said that the Hazy Hideaway in Cedar Rapids sponsored me to drive up and see the my personal solo music hero, I didn’t believe them…. at first. We radio folks like to push each other’s buttons and give each other crap during the day….  I was sure that this was one of those moments, but ON AIR???

But then, they confirmed that this was real and I was going to see THE PAUL MCCARTNEY at the legendary NFL stadium, Lambeau Field!! I got immediate goosebumps, and was a little choked up. I had to keep it together though. I WAS ON AIR!! I wasn’t about to cry like a little girl who was just told they were going to meet Katy Perry (little girls still like her, right?).

After all of the deaths I had suffered over 2018, my depression taking a hit because of those losses, and other everyday type stressors, at that moment, I felt it was the cosmos trying to make it up to me. It was just the week prior, when I was told that I was going to be the one giving away McCartney tickets (a cruel joke, indeed), that I questioned, rather loudly, “I don’t suppose there are any staff tickets that I could get for handing out tickets to one of my all-time bucket list artists!?!?!” There was no response.

I immediately called my wife and my kids to tell them and the 2 oldest both said that they were so happy for me they cried. They KNOW how much The Beatles mean to me. They also knew that I had just resigned myself to the idea that I would ever see a former Beatle, live in concert. I just couldn’t justify spending over $100 dollars for a 2-3 hour concert when there’s food I can put in the fridge for that kind of money.

So, the next week, I hosted Sunday Night Vinyl and played McCartney and Wings’ ‘Band On The Run’ album, to kick off a week of my show focusing on Paul McCartney at Lambeau, June 8th. My Forgotten 45’s at 45 were McCartney songs all week, culminating in my wife and I driving the KOKZ vehicle to Green Bay, and posting a chronicle of the trip, on our way there. Using our social media channels (Facebook, Twitter and Instagram), I posted videos of our trip and stops at Kwik Star/Kwik Trip to put gas on and grab some eats for the journey. Again, a big hug and thank you to The Hazy Hideaway in Cedar Rapids for making this possible and making my all-time TOP dream, come true.

I can admit I cried 5 or 6 times in the near 3 hours Paul played. The biggest “ugly cry” was when Paul was about to play a song with a ukulele. He mentioned that George Harrison was an incredible ukulele player and held up the one in his hands to show everyone that George had given him that one. There was a wonderful gasp of excitement that evolved into applause. Paul mentioned that he’d “gone ’round to George’s house and were jamming with ukuleles when [Paul] told him that [I’d] arranged a new version of one of [your] songs.” He said George asked him which, and then Paul went right into playing a soft, Hawaiian version of “Something”, from Abbey Road.

As Paul strummed and sang, the screen behind him showed various pics of George in different ages and eras. However, it was one photo that I had seen hundreds of times that it hit me…. 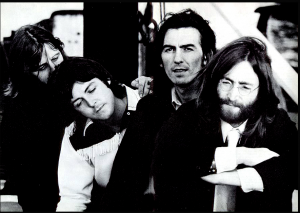 (It was a variant of the pic above.)

I was looking a young and vibrant Paul next to George and the others and that I was there, in that moment, living in time as a legendary musician was playing one of the other legends’ songs on that legend’s instrument. I was in the presence of one of the most important and influential people that helped shape my musical life, which is one of the MOST IMPORTANT parts of my life. I immediately clasped my hand over my mouth and froze as I sobbed, tears streaming down my face, as I came to grips with the moment I was having. It was something I never expected and something I cherish that happened to me.

Now, for pics and some video!

My wife and I and the obligatory concert selfie.

I came, I saw, I bought a very expensive t-shirt.

Notice something???? No Green Bay?

Video 2 of Shawn's Ticket To Ride

Video 3 of Shawn's Ticket To Ride

Video 4 of Shawn's Ticket To Ride

Video 5 of Shawn's Ticket To Ride

Video 6 of Shawn's Ticket To Ride