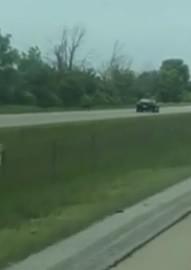 So THIS happened!!! The cops in Greenfield, Indiana pulled over 19-year-old De’Ante Parrish for driving the wrong way on the shoulder of Interstate 70 last week. There was traffic, so he told them, quote, “It was faster” to drive the wrong way on the other side of the highway. Fortunately, the cops caught him before he caused an accident even though some people had to swerve to avoid him. He’s been charged with reckless driving. Again, he was totally sober, so he’s not facing DUI charges.