Led Zeppelin – Fool In the Rain 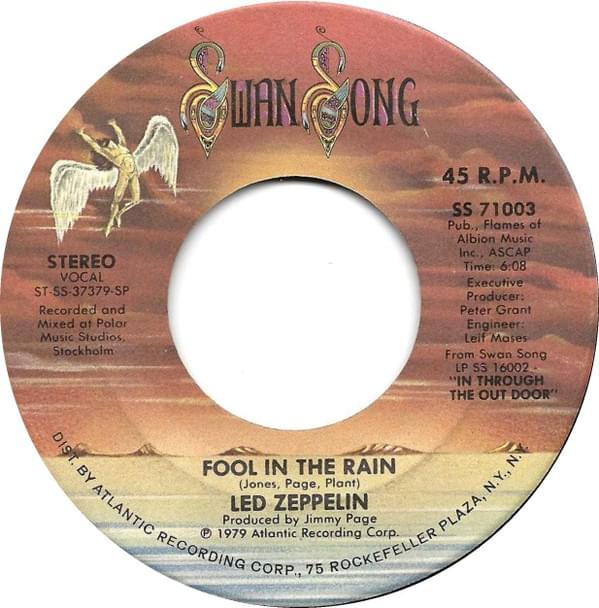 Led Zeppelin’s last released single before splitting up due to the tragic lost of Bonzo (John Bonham), “Fool In The Rain” went Top 40 and peaked at #21 on the Hot 100 in the US.

It’s the third track on the album, ‘In Through The Outdoor’, which was an interesting release, on it’s own. It came in a brown paper wrap with the title stamped in ink. When opened (many people ripped it off and through the paper away, where others meticulously opened it so the album could be out back into the paper, when not in use. It also had 6 different covers which were pictures of a man in a bar burning a “Dear John” letter. Each pic was taken from the vantage point of someone else in the bar. You’d never know which one you were buying because of the paper bag wrap. Also, the inner sleeve (the one that holds the vinyl) was a black and white artwork that would become permanently colored if washed with water.

“Fool In The Rain” is an interesting song. The writer is telling the woman he loves to come out and meet him on the corner and they can go out for the night. While he waits and waits, he expresses that he hopes she comes because he loves her so much and can’t wait to see her again. He waits longer lamenting that she isn’t coming and what he did to deserve being stood up, only to realize, at the last minute, he was a “Fool In The Rain” for standing on the wrong corner, waiting for her to show, all night, in the rain.