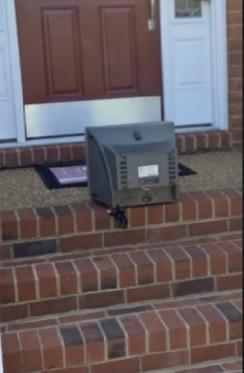 I’m at a loss on this one. Residents in a Virginia town are trying to figure out why someone would be leaving TV’s on their porches in the middle of the night. And these aren’t the flat screen type of TV’s, we are talking about the old picture tube television sets. Nearly a year ago a neighborhood woke up to find dozens of vintage box television sets sitting on their front porches. Police never figured out who was doing it but it just happened again. Only this time the culprits, who apparently dropped off more than 50 TVs, were caught on several neighbors’ doorbell cameras. Officers said more than one person “wearing a mask resembling a television” dropped off the TVs to “the majority of homes throughout the community.” Many of the residents had security cameras installed and saw the same thing. Neighbors estimated more than 20 vintage televisions were left at homes throughout their neighborhood this week. Police have no leads or any idea as to why this is being done.