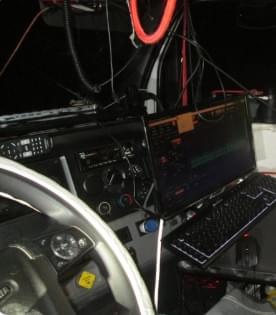 THIS is a new one!!! A Washington State Patrol Trooper discovered another form of distracted driving during a traffic stop for speeding that led to an eventual arrest of a truck driver. Trooper Thorson posted on Twitter that he thought he had seen it all but he came across something he’s never witnessed. After pulling over a semi-truck for speeding, the driver was arrested for suspicion of DUI/drugs. On top of that though, he found out the suspect appears to have turned their semi-truck into a studio, producing/recording music while driving on the highway. Thorson said there was even a drop-down mic from the ceiling of the cab. The Trooper closed the tweet with a “Not Acceptable” hashtag.