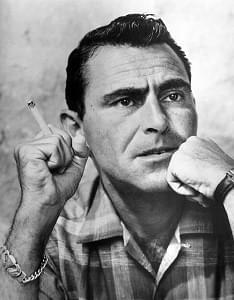 Happy Twilight Zone Day! Pretty good timing for it with what we’ve been going through the last couple of months.  The Twilight Zone was one of the most groundbreaking shows ever on television.  Shortly after it premiered, it was love by kids, teens and adults that affected generations of people. Rod Serling first read these words on television in 1959:

There is a fifth dimension beyond that which is known to man. It is a dimension as vast as space and as timeless as infinity. It is the middle ground between light and shadow, between science and superstition, and it lies between the pit of man’s fears and the summit of his knowledge. This is the dimension of imagination. It is an area, which we call the Twilight Zone.

In six years, he changed the American television landscape and captured generations of fans. Since then, there have been reboots on television (in the 80s as well as the new version which premiered last year on CBS All Access) but there will never be a show like the original.

What’s your favorite episode?  Maybe a countdown of the best episodes by SYFY Wire will help you figure that out.