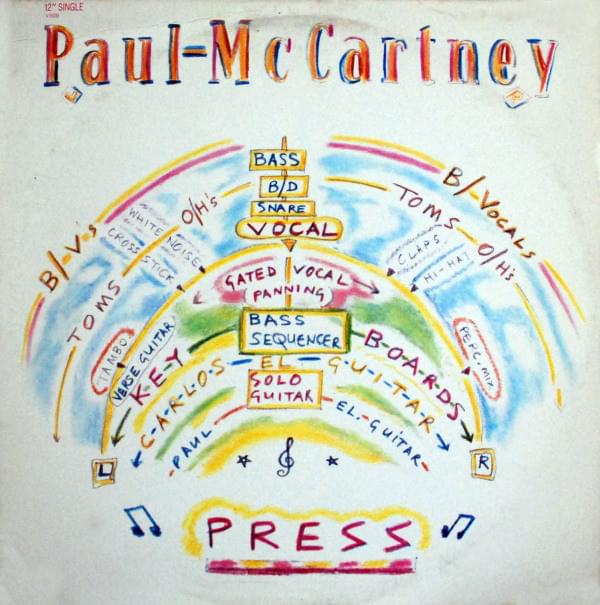 Back to 1986 with Paul McCartney and the lead off single from his album, ‘Press To Play’.

This was the beginning of a downturn in the quality of McCartney’s writing and was the last single to hit the Top 40 until 1989 and working with Elvis Costello on ‘My Brave Face”.

“Press” peaked at #21 on the Hot 100 and fell fast off the charts after…. Many critics had said that while “Press” and the album, ‘Press To Play’ were fine, they really weren’t of the caliber of past McCartney efforts. Fans felt the same as there weren’t really many radio friendly “hooks” that grabbed the listener and held on to them. Some Macca-fan critics were more polite, while other, more discerning reviewers were less kind and not willing to ‘Put lipstick on a pig”…

I like the album, overall, as well as the song, but I too, feel this was just part of the extreme work ethic of Paul McCartney. Writing music is his job… Crafting songs, is his work…. When not doing either, he’s lost to other things and then finding his way back has always been hard on him. When he’s hot, he’s hot… When he’s not, it’s noticeable.

Listen to a great podcast on this from FABCAST - The Beatles Podcast
Copyright © 2020 by NRG Media. Internet Development by Frankly Media.