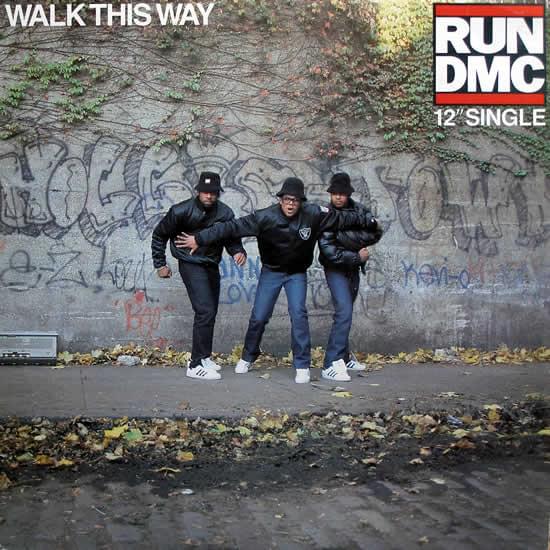 Originally released in 1975 on Aerosmith’s ‘Toys In The Attic’, eleven years later, hip-hop pioneers, Run-DMC recorded “Walk This Way” with Steven Tyler and Joe Perry and it charted higher than the beloved original!

Master producer, Rick Rubin, brought the ‘Toys…’ album in to have them listen to the whole song, as DJ, Jam Master Jay was using the beginning riff from a 12″ vinyl for mixing during concerts. Run-DMC had never heard the whole song before and weren’t keen on redoing it. They did re-record it with Tyler and Perry and still didn’t want to release it as a single from the album, ‘Raising Hell’, but found that hip-hop and rock radio stations were playing it and listeners loved it and started requesting it, more and more!

They made a video for the song, in which Tyler and Perry both appear and MTV aired it in high rotation. Coincidentally, this match-up was the catalyst to Aerosmith’s pop come-back, after several years of low selling concerts, albums missing Brad Whitford and Joe Perry, and getting clean and sober for the whole band! The song came out after the “come-back” album, ‘Done With Mirrors’ was released and did little to help Aerosmith’s waning career, but after “Walk This Way” opened doors for the band, once again, the following album, ‘Permanent Vacation’, was a multi-platinum seller with Top 40 hits and began the meteoric rise of Aerosmith, once again!

“Walk…” peaked at number 4 on the U.S. Hot 100 and literally, brought a new generation and new culture of fans to hip-hop music!