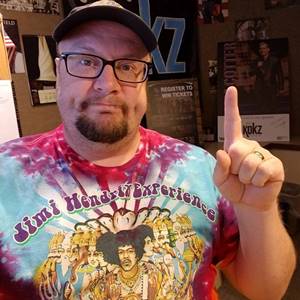 I was born in De Witt, IA. My parents are big music fans and musicians, themselves. I’ve been listening to music as long as I can remember. Dad is also a collector, as I am. We love vinyl! It’s THE best way to really enjoy listening to music. We both have lots of records. I also collect CDs, reels, cassettes, 78s, etc. If it has music on it, I want it!

I became interested in music as a kid. Listened to Spike At the Mike on, what was then, KIIK 104 FM, in Davenport. He went on to greatness and became a broadcasting legend at the big WGN in Chicago. When I found him on Facebook, I “friended” him and told him that he was my inspiration to become a broadcaster. He then, politely, apologized for doing so.

I worked my first gigs in the Quad Cities. Top 40 morning show, overnights and weekends at a rock station, briefly on an Adult CHR, then to a Classic Hits format. I got out of radio in 1996 after my first child, a daughter, was born.

While being in retail management for about 10 years, I was still listening to radio. Iowa, Arizona, Minnesota stations. I always heard myself saying, “I can still do that! I’m better than that guy!” Well, whether I was or not, I still loved radio for what it was. The history, the sound, the music – everything.

After having 3 kids ( 1 girl and 2 boys), and then starting another relationship, I married my best friend. We dated 11 years earlier and lost touch for ten years. Fate played it’s hand and we had another child, a boy.

I decided to try getting back into radio broadcasting in 2008, while living in Marion. I sent in my info and air-checks and was offered a position here, on 105-7 KOKZ! I’ve been here ever since doing any and all shifts and loving every minute of it! My life is pretty great now! Great wife, kids and career!

Thanks for listening along! I appreciate it!!

The Artist (Formerly Known As Prince) – The Most beautiful Girl In The World Just after Prince changed his name to an unpronounceable sign, , he went on an incredible wave of creativity that spawned hits like “7”, “The Morning Papers” and ironically, “My Name Is Prince”… However, as he was working on getting out of…… END_OF_DOCUMENT_TOKEN_TO_BE_REPLACED

David Dundas – Jeans On Another on-hit wonder going back to 1977! Originally, it was a commercial jingle for Brutus Jeans, but it became so popular, David Dundas was able to return to the studio and record a full version of the song! It came out as a single from his self-titled album and climbed…… END_OF_DOCUMENT_TOKEN_TO_BE_REPLACED

5 days away from Christmas, why not play a record of Christmas music! From Mannheim Steamroller released “Christmas” in 1984 and since then, it’s become one of the all-time best selling Christmas albums, surpassing 6x platinum! I remember listening to this as a kid and then a teen, and young adult, dad, older dad and…… END_OF_DOCUMENT_TOKEN_TO_BE_REPLACED

Happy #71 to Paul Rodgers!! The Firm – Satisfaction Guaranteed After Paul Rodgers left Bad Company for a solo career, it didn’t really take off as he had hoped, but at the right moment, he reconnected with friend and Bad Company label owner, Jimmy Page. Page wanted to put another band together and see what…… END_OF_DOCUMENT_TOKEN_TO_BE_REPLACED

This week we have Dane. Dane is a 2 year old male Pit Bull Mix. Dane is an energetic boy with a heart almost as big as he is! He loves attention but he doesn’t understand his size yet. He can become easily overstimulated but he is very smart and listens to commands. Dane loves…… END_OF_DOCUMENT_TOKEN_TO_BE_REPLACED

Neil Diamond – Yesterday’s Songs Released as the first single from Neil Diamond’s 1981 album, ‘On The Way To the Sky’. It became a monster hit on adult contemporary radio, peaking at #1 on that Billboard chart for six weeks! It did well on the Billboard Top 40, peaking at #11 and was the 77th…… END_OF_DOCUMENT_TOKEN_TO_BE_REPLACED